When The Great Train Robbery was released in 1903, the 12-minute American silent film exposed viewers to the exquisite drama of the Wild West. But the genre had been explored far earlier than this; artists including Charles ‘Kid’ Russell and Frederic Remington had captured the allure of the cowboy in their sketches, cartoons, paintings and sculptures since the late 19th century.

Bringing what former U.S. president Theodore Roosevelt called a "most characteristic and yet vanishing type of American life" to a modern audience is artist Billy Schenck, whose western-inspired collection, The New West, is influenced by black-and-white stills of Hollywood westerns and the Pop Art style of Andy Warhol and Roy Lichtenstein.

For the last five decades, the artist, who in 2018 shared a retrospective exhibition with Warhol at the Briscoe Western Art Museum, has transformed the genre. His exploration of the western landscape has seen him travel the arid terrain of Monument Valley to combine real-life scenes with the fiery lands of his imagination, earning him the title of the 'grandaddy' of contemporary western art. As the quintessential American hero, the lone cowboy has legendary status in popular culture. In recent years, Richard Prince has depicted their idealised masculinity in his Cowboys series (1980-1992). For this project, he re-photographed and deconstructed Marlboro cigarette advertisements, creating close-ups of the cowboys by cropping out text.

Other notable artists include Charles Marion Russell (1864-1926), who earned his keep as a cowboy in Montana Territory and carried a small bundle of watercolours and brushes (sometimes in a sock!), sketching whenever he had chance.

The painter, illustrator and sculptor Frederic Remington (1861-1909) captured the American Old West. His father was a colonel in the American Civil War and he was related to the painter of Native American tribes, George Catlin. Saddened by the world that was disappearing around him, he recorded the cowboys, soldiers, ranchers, Indians, horses and cattle of the plains in his colourful artworks.

"There are very few folklore heroes to call on, but the ideology of the cowboy is far from dead. Everyone wants to be a cowboy." 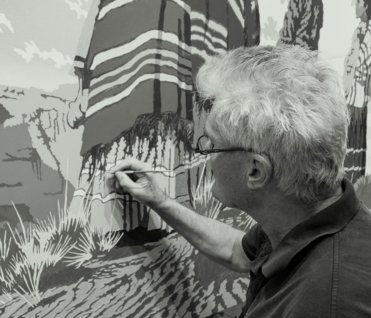 'Warhol of the West' Billy Schenck

The real-life ranch sorting world champion brings his stunning exploration of Western mythology to the UK in his sizzling collection, The New West. 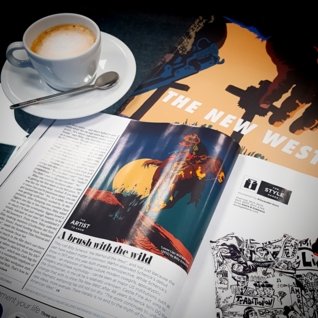 As seen in GQ! The New West by Billy Schenck

The bestselling men’s magazine GQ highlighted the collection, which explores the western genre. The silkscreen prints are available online and in galleries. The 'Warhol of the West' has returned to reclaim his town! His colourful new artworks explore a series of fiery landscapes inspired by spaghetti westerns.