Not content with shocking collectors with their raucous Eccentricus Britannicus release, Peter and Jayne Smith have returned with a truly dastardly sculpture. Like their other creations, you'll find it Impossimal to resist!

Based on a twisted Victorian tale straight from Peter's imagination, it depicts a banker who has been mysteriously transformed into a sweet-guzzling beast by a magical potion found in an old safety deposit box. After clambering to the top of the Big Ben, he is injected with a syringe by none other than the author of The Strange Case of Dr Jekyll and Mr Hyde, Robert Louis Stevenson.

Lost Impossimals fans may recognise this fiendish fellow, who has previously appeared in a stunning canvas and board artwork from 2013, showcased below. 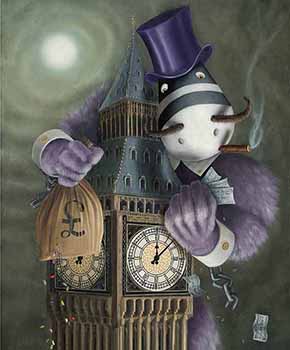 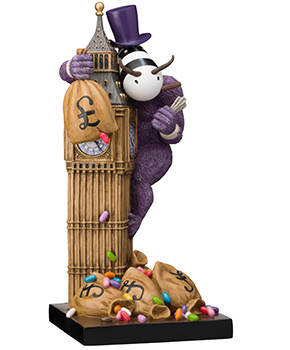 Quirky duo Peter and Jayne Smith have been busy touring the UK with their outrageous new collection, which includes original artworks and a personalisable print! Shop the collection now.

If you've got a festive soirée coming up, we've got just the thing! The delectable Peter and Jayne Smith let us in on their top tip(ples) for hosting the best Impossimal party.

Tea for two with Peter and Jayne Smith

Ever wondered what it would be like to explore Peter and Jayne Smith's world of Impossimals? Wonder no longer.