Tom and Jerry misbehave in 'Tee Time' from Hanna-Barbera

Available to order now, this golf-themed limited edition print from our popular Hanna-Barbera series features the animation favourites Tom Cat and Jerry Mouse in a humorous scene that is perfect for any cartoon fan. Taken from the classic 1945 cartoon short Tee for Two, the artwork unites one of history's most iconic cartoon duos for a nostalgic scene that can be enjoyed with family and friends. To find out more about this release or other artworks from our Hanna-Barbera collection, get in touch. 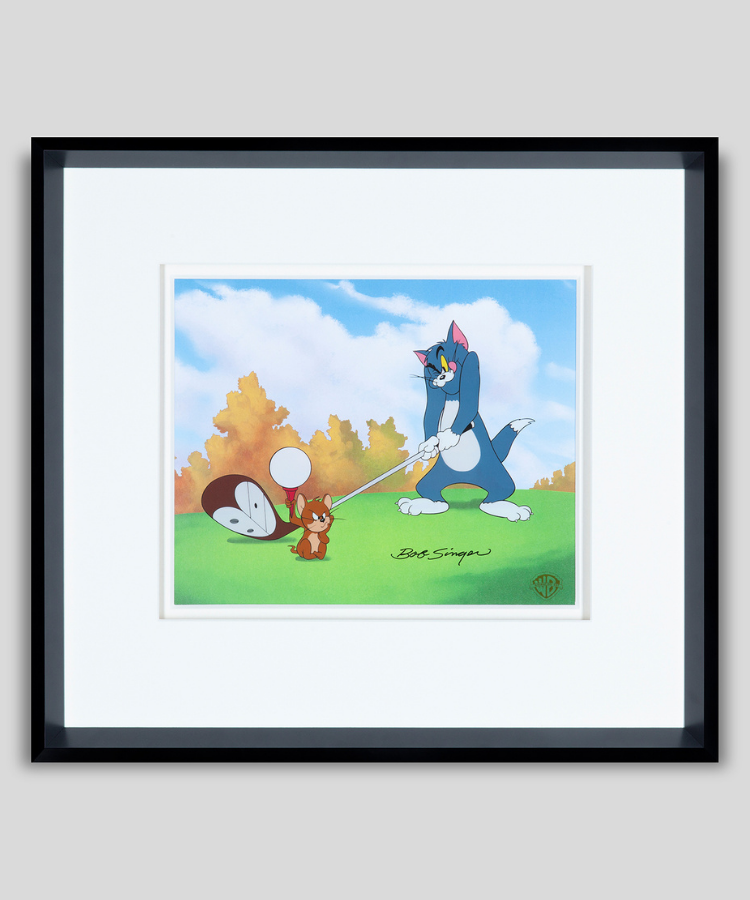 About 'Tee for Two': an iconic Hollywood cartoon

First released in 1945, the cartoon short Tee for Two has become one of William Hanna and Joesph Barbera's most memorable animations, largely due to its slapstick 'bees nest' scene, in which Tom Cat jumps out of his skin to avoid being stung by a swarm of bees. Set on a golf course, the Technicolor film sees a frustrated Tom Cat attempting to play golf while Jerry Mouse thwarts his every attempt.

Technicolor was the most widely-used colour process during the Golden Age of Hollywood, and its vibrant tones have been brought to life via silkscreen printing  for this collectible limited edition print. Tom and Jerry's exaggerated facial features - including frowns, raised eyebrows and whiskers - are represented in the same crisp detail that enthralled audiences at movie theatres upon the film's original release.

This serigraph cel was created by meticulously silkscreening every individual colour onto an acetate cel before mounting it on a printed background. Framed in glass and a sustainable pine and spruce wood frame, it is signed by the animation legend Bob Singer, who also worked on series including The Flintstones, Scooby-Doo, Where Are You! and The Jetsons.

Our Hanna-Barbera collection has been curated with the help of the art experts Ruth Clampett and Ari Goldman. Ruth is the founder and creative director of Clampett Studio Collections, which is the publisher of the Warner Bros. fine art programme. Ari is one of the longest-operating and most reputable vintage animation art dealers in the world, and also curates our Disney Vintage collection of original production cels, storyboards, drawings and model sheets from some of Disney's best-loved films.

Each of the artworks is signed by one or more of history's greatest animators, including William Hanna, Joseph Barbera, Bob Singer and Iwa Takamoto. They feature either a Hanna-Barbera stamp or seal of authenticity, or a Clampett Studios stamp. Ruth adds: "This amazing collection of Hanna-Barbera art will never be created the same way again."

Who are William Hanna and Joseph Barbera?

After meeting at the MGM cartoon studio in 1939 at the end of America’s Great Depression, William Hanna and Joseph Barbera embarked on a partnership that transformed television forever. When MGM closed their cartoon studio in 1957, the pair joined forces with many of their colleagues and opened H-B Enterprises (rebranded as Hanna-Barbera Productions, Inc. in 1959).

Following the success of series like The Huckleberry Hound Show, The Yogi Bear Show, The Flintstones and Top Cat, the studio moved to a sprawling new complex in Los Angeles in 1963. With a cartoonish façade inspired by the Space Age style of The Jetsons, this innovative hub of creativity produced some of the world’s best-loved television programmes, earning Hanna and Barbera the moniker ‘The General Motors of Animation’.

At the heart of American television for over four decades, Hanna and Barbera were awarded seven Academy Awards, eight Emmy Awards and a star on the Hollywood Walk of Fame. In 2001, their studio was absorbed by Warner Bros. Animation and their characters continue to inspire children and animation artists worldwide.

"Parents look at me like I'm somebody pretty important, and say, 'We were raised on your characters, and now we're enjoying them all over again with our children.'" Our monthly series of art insights is brought to you by Washington Green Fine Art’s founder, Glyn Washington. In February 2022, we went behind the scenes with the celebrated glass painter to celebrate his new collection.