On 1st July 2016, with the help of the award-winning film set designer Kaye Quinn, a 2,500 sq. ft unit in London’s Greenwich became a blown-out building in a war-ravaged Flanders village. As the sound of heavy artillery fire blasted in the distance, viewers stepped through the rubble and barbed wire into the First World War. The Danger Tree had begun.

This November, to mark the centenary of the Great War, creators Scarlett Raven and Marc Marot have released a new artwork from the groundbreaking augmented reality project. The emotive piece is inspired by Marc's late grandfather, who regaled a young Marc with tales of battle. 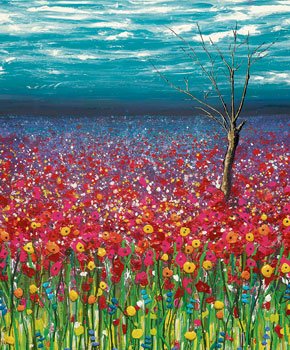 Shall I Sing to You | Boxed Canvas

Shall I Sing to You | Giclée On Paper

Shall I Sing To You?

Depicting the infamous Danger Tree – the last tree standing on the battlefield – 'Shall I Sing To You' is inspired by Marc ’s grandfather, Private Eddie Bigwood (also known as ‘Grampy’. Marc explains: “At the age of 17, he was seriously wounded on The Somme, losing much of his bottom jaw and right ear. He opened up to me in his mid-80s, filling my head with unbelievable stories. He lived to be 100 years old and truly was my hero.”

The story so far

The project was inspired by Scarlett’s late father, Raphael, who passed on his interest in the Great War and the symbolism of the poppy to his daughter. In the series of interactive artworks – brought to life with the Blippar app – soldiers’ stories are transformed through poetry, film, music and narrations from celebrities including Christopher Eccleston, Vicky McClure and Sean Bean.

To date, The Danger Tree has touched the hearts and minds of thousands of people - featuring at prestigious locations including Liverpool's Martin Luther King Jnr Building, Manchester Central Library and Titanic Belfast. Transcending age, race and background, it speaks to everyone who knows what it means to love. Follow the project's journey here.