Displayed at galleries like the Tate and the Museum of Modern Art, Andy Warhol's Cow series has become one of the Pop Art founder's most iconic and instantly recognisable editions. Now, for the first time in history, the graphic has been meticulously recreated using the original acetate by the London-based artist Paul Stephenson, whose After Warhol collection saw his work dubbed 'posthumous Warhols' by the late Warholian expert Rainer Crone.

As featured by the BBC and VICE magazine, Paul's groundbreaking project has seen him transform Warhol's original acetates - including those used for 'Jackie', 'Mao', 'Little Electric Chair' and 'Self Portrait' - for an exclusive collection of limited edition prints. His latest release, inspired by Warhol's seminal Cow series (1966-76), includes four psychedelic colourways, each of which has been expertly printed as silkscreens on paper and framed by hand. Each artwork also features a window on the reverse so the stamps - including 'UNDENIED' in homage to the Andy Warhol Art Authentication Board's collapse in 2012 - can be seen.

Originally printed on wallpaper, the Cow series subverted the timelessness of the pastoral subject, allowing Warhol to wryly comment on the use of fine art as wallpaper in people’s homes. Paul explains: “It’s a typical, mischievous Warhol idea: taking something ‘fine art’ and making it something that’s just a background, but actually also an incredible, iconic Pop image.”

To find out more about the collection, get in touch or contact your local gallery. You can also discover more about Warhol's original artwork and Paul's techniques below. 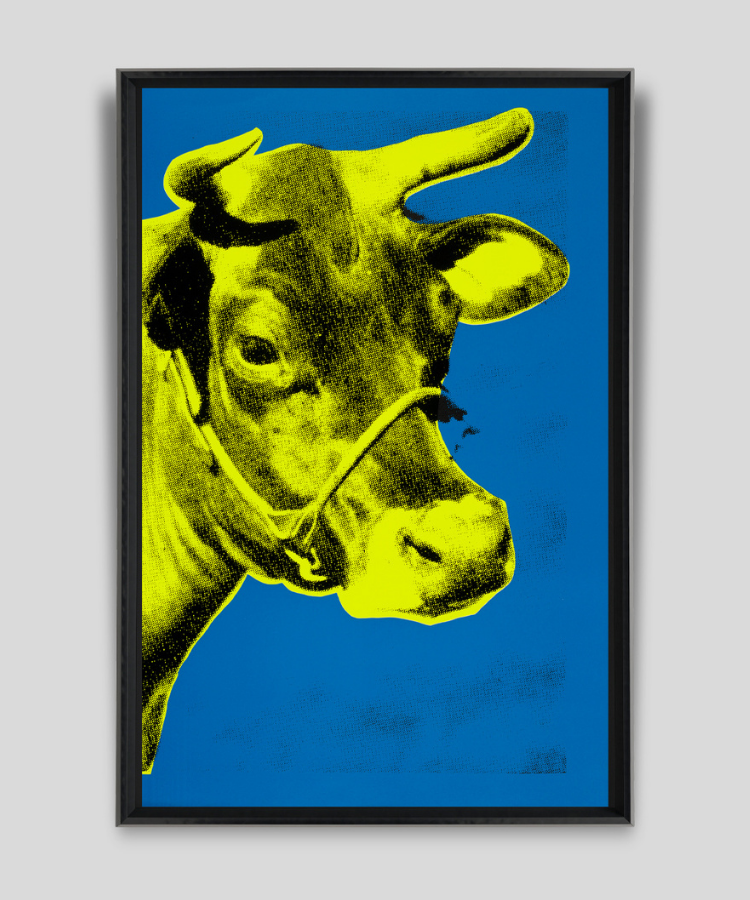 Cow I- Yellow On Blue 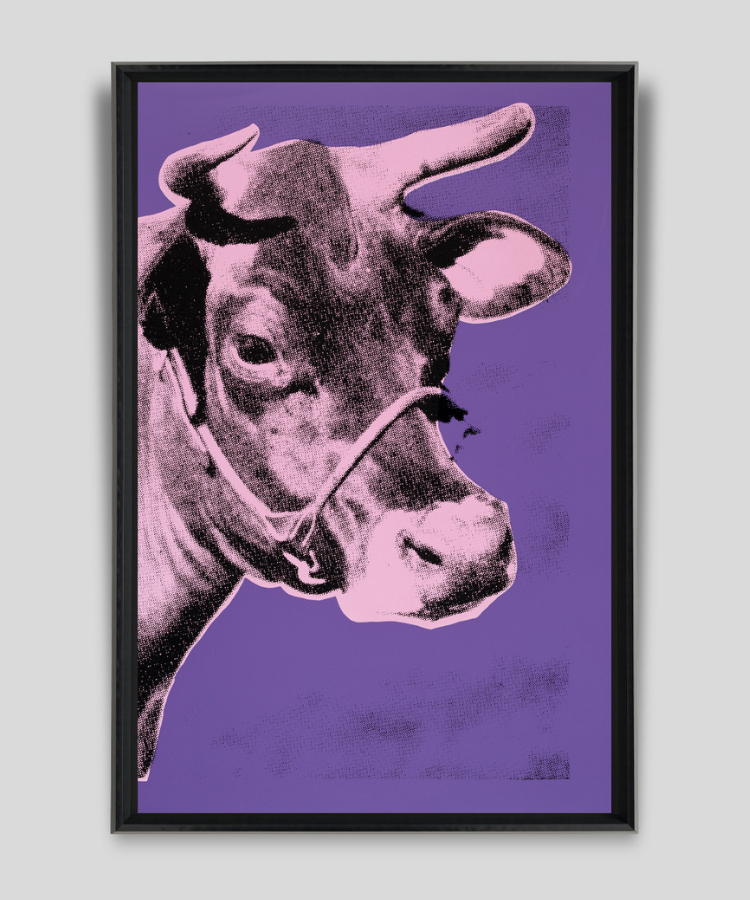 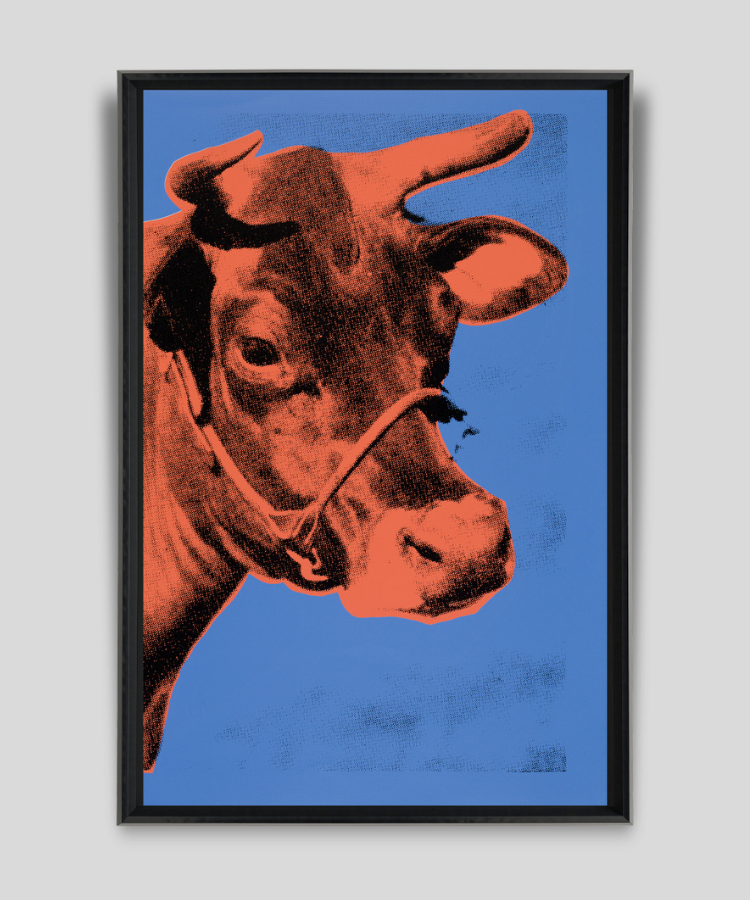 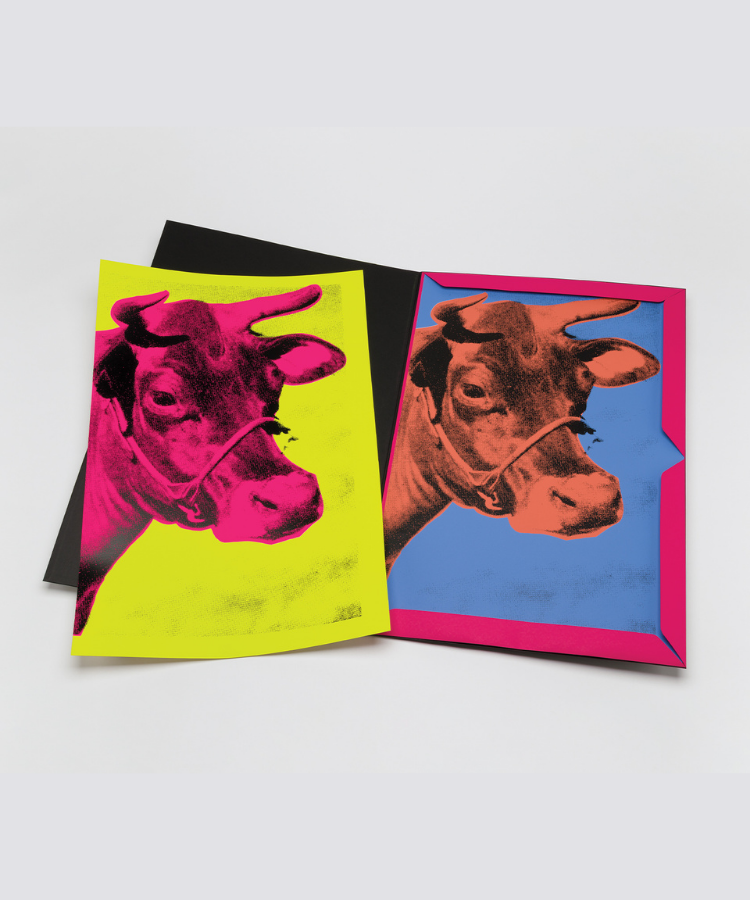 Now one of Warhol’s most collected graphics, the cow was originally chosen by his assistant, Gerard Malanga, upon the advice of the American Pop Art dealer Ivan Karp. The pair experimented with vibrant and unexpected neon colourways between 1966 and 1976, with the cows created as wallpapers for Warhol’s exhibitions.

For his 1966 show at the Leo Castelli Gallery in New York, a single room was adorned from floor to ceiling with the fluorescent pink and yellow colourway. Transcending decorative and artistic genres, these wallpapers – which Karp described as “blazingly bright and vulgar” – were displayed in institutes such as the Whitney Museum in New York and the Modern Art Pavilion in Seattle.

Here, visitors were surrounded by the striking simplicity of the repeated imagery, which signified Warhol’s unique take on commercialisation and mass production. Single cows were sometimes spliced from the wallpaper and signed by Warhol, who actively encouraged other artists to copy (or even create!) his work.

The humorous colour scheme lends the artworks a feeling of excitement, which inspired Paul to create this collection during COVID-19, which has been a time of anxiety and uncertainty. Intended to bring viewers hope and laughter, the artworks each relate to a specific Warhol exhibition, giving them a place in the narrative of art history.

Paul adds: “There’s always an element of mischief with Warhol, and the mischief in this image, and what’s revolutionary, is that Warhol is using a recognisably industrial process – wallpaper-making – to make art."

There are few images more iconic than Andy Warhol's legendary rendering of the style icon Jackie O. For his latest collection, Paul has created a series of unique silkscreens using the Pop Art founder's original acetate.

Are you looking to spruce up your home this spring? We have just the solution! Check out the décor ideas you can recreate this season.
Essential cookies