Inside the dens of the Peaky Blinders: Jon Jones

Born and bred in Birmingham, painter Jon Jones is no stranger to the city's dark side. For his Spring/Summer 2021 release, he has mixed fictional scenes with historical research (and a little artistic license) for four haunting new limited edition prints. In this article, he takes us through the backstreets of Birmingham and into the dens of the legendary Peaky Blinders gang.

Shifting in time from the real-life reign of the Peaky Blinders in the late 19th century and early 1900s to the drama-filled scenes of World War One and the Prohibition years of the 1920s allowed Jon to frame his art in a new perspective. These hand-varnished canvasses are not just the result of intense research alongside the West Midlands Police Museum, but an exploration of the themes that defined the era, including family, survival and brotherhood.

Like the smoky streets of Small Heath, where the gang ruled through violence and corruption, Jon's works are cloaked in shadow. The contrast between light and dark - also known as chiaroscuro - was recreated using the giclée printing process, which involves spraying microscopic dots of pigment-based ink to closely emulate the incredible detail of the original painting. Following this, the works were hand-embellished with a special combination of varnishes and gels to give them texture and depth.

Scroll down for Jon's tour through history, or if you'd like to find out more about the collection, including Jon's first-ever triptych, contact us. 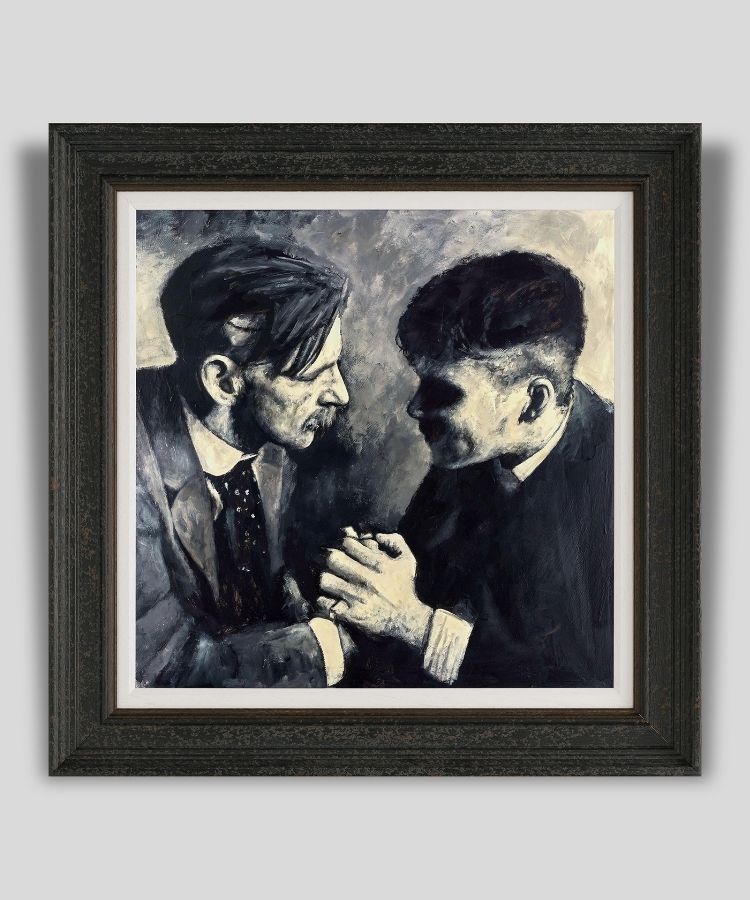 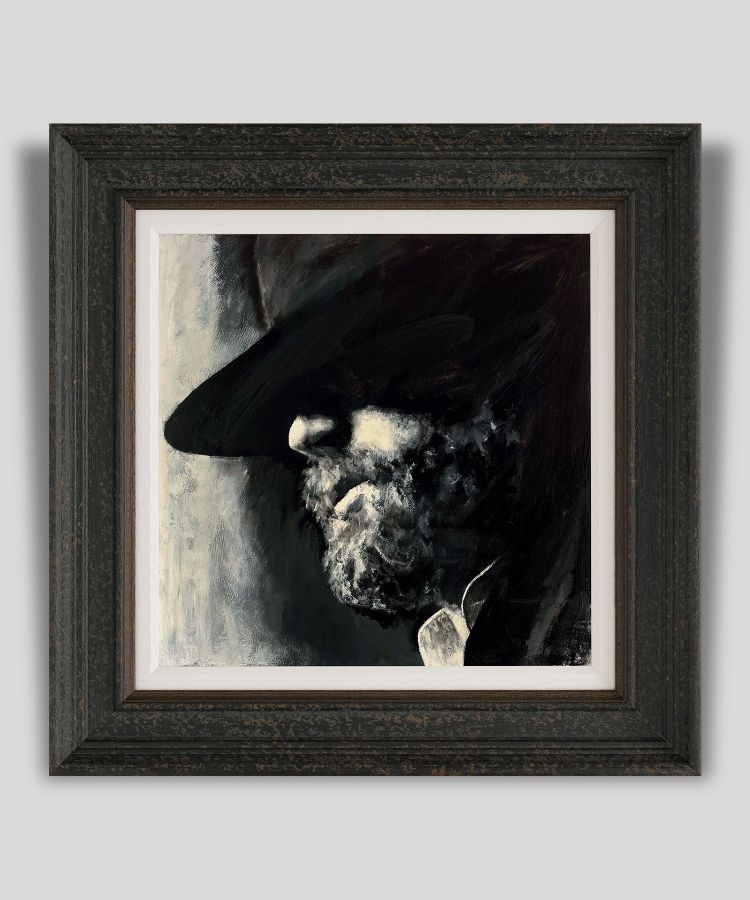 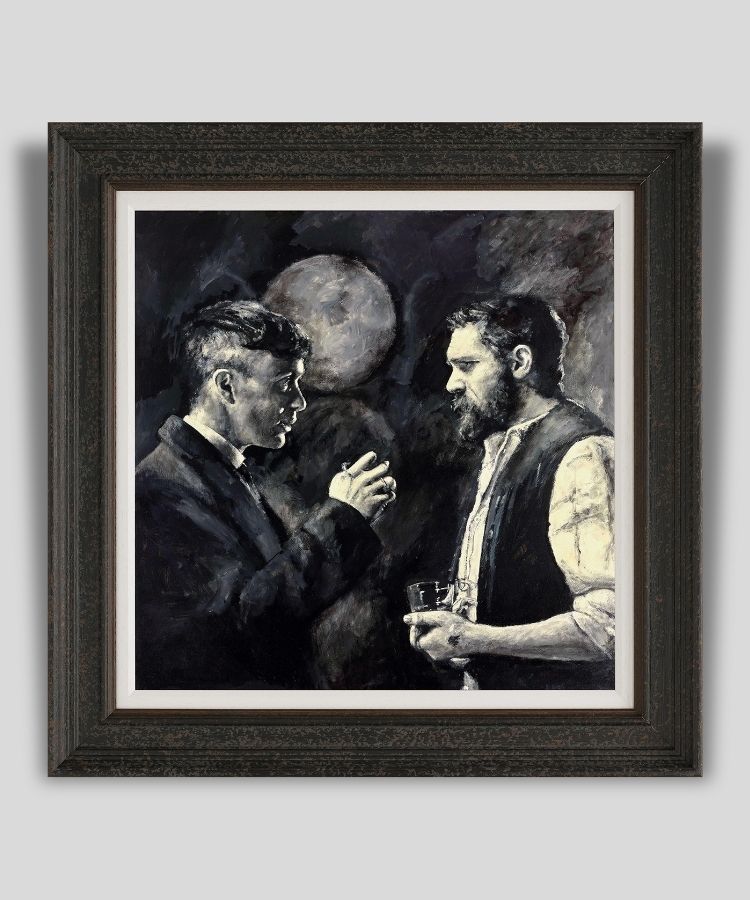 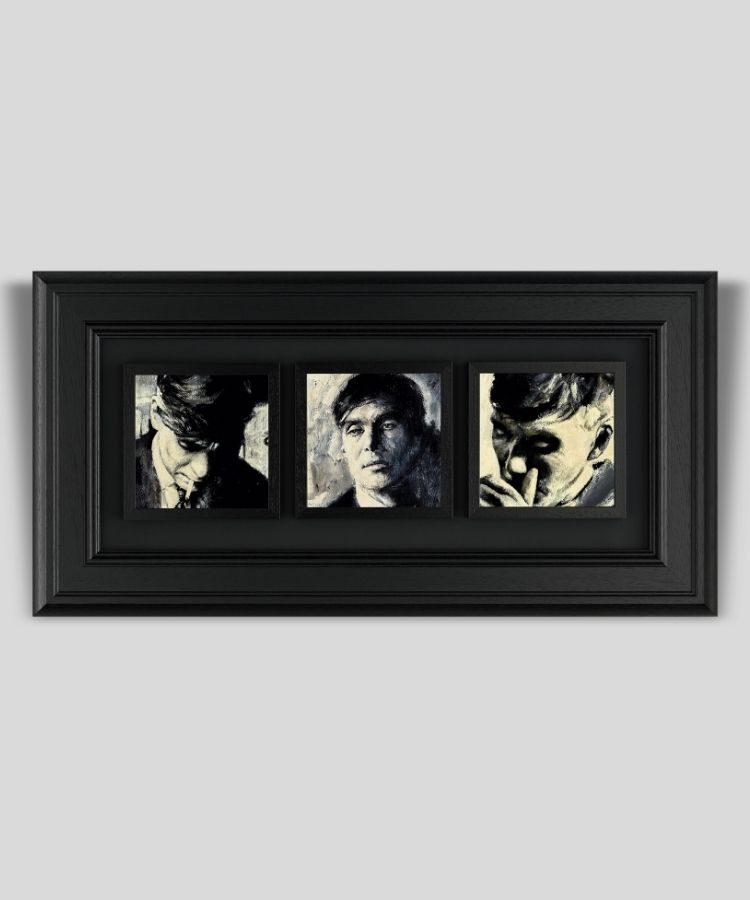 Jon's research into the real-life Peaky Blinders saw him explore the streets of Birmingham, where the gang became infamous for their crimes. Discover his full collection of limited edition and original artworks here. It was after reading about the gang member Stephen McNickle that Jon was inspired to investigate the Peaky Blinders. He says: "My obsession took over. I discovered that he had fought in World War One and died of his wounds shortly after. I read his war records; this man wasn’t really a criminal, he was a hero."

Jon, whose grandfather was a soldier, named 'Flanders Blues' after the slang term for the shell shock experienced by men on the frontline. After the war, many British men joined gangs as they returned home to a country with no jobs left for them. Desensitised to violence, they found themselves doing whatever was necessary to survive and protect their family.

Jon says: “The soldiers were so young, and saw such terrible things. When you read about it in books or watch it on television, you can’t smell those smells, or feel the cold. They could not fear death.”

While the Roaring '20s saw the world recover from the war and the emergence of jazz, explosion of Art Deco and exciting advancements in the film and automobile industries, it was also a period that was rife with crime.

During Prohibition (the 1920-1933 legal ban of alcohol in the United States), organised crime gangs such as the Mafia smuggled alcohol from Britain into America. In 'Tommy & Alfie First Meeting', Jon sets his tense scene against the barrels of beer in the background.

The Peaky Blinders themselves were fond of a tipple, with one of their favourite haunts said to be the Garrison Tavern in Small Heath. Jon adds: "Growing up, I didn’t want to play football when up the road was the Hare and Hounds, where the landlord said people had been hanged and the cellar was a mortuary.” Behind all of Jon's artworks is an intense sense of kinship. Although the Peaky Blinders may be famed for their violent hold over the residents of Watery Lane, beneath the peaked flat caps and lapel overcoats was a desire to protect the people they loved.

Set against the industrial backdrop of Birmingham's factories and furnaces, where gang members would often hold their illicit meetings, Jon's artworks use shadows to create a feeling of intimacy. In 'I've Heard Bad, Bad, Bad Things About You Birmingham People', the viewer is left to wonder who lies beyond the canvas.

Jon adds: “It’s a connection between two people; it’s more than family and brotherly love. The respect between two gangsters – like the Kray twins – means that no matter what happens between them, there is an unbreakable bond.”

We are delighted to be working with our chosen charity, Birmingham Children's Hospital Charity, to raise funds through the sale of Jon's artworks.

"I want the eyes to be alive and the viewer to be connected. You can see a glint in someone’s eye and wonder what is going on." Jon Jones' new collection showcases the darker side of history

The Midlands-based artist has explored the infamous Peaky Blinders gang in these haunting portraits. We're thrilled to be raising funds for the Birmingham Children's Hospital Charity through the sales of Jon's art.

Dating back to at least ancient Egypt, portraiture is still one of the world’s most popular genres. Join us as we explore a world before selfies.