British artist Nic Joly has raised over £80,000 for The Royal British Legion through sales of 'Never Forgotten'. From the sale of each piece, Castle Fine Art will donate £100 to the charity to help Nic reach his goal of raising £150,000 to help support veterans past and present.

Drawing on the ultimate symbol of remembrance and hope - the poppy - the signed, limited edition miniature sculpture was released in August 2014 ahead of the 100th anniversary of the outbreak of the First World War. The edition size of 1566 represents each day the war was fought, and each sculpture is labelled on the back with a unique piece of information about that day.

Standing less than two inches high unframed, the tiny figures have touched the hearts of people around the world, with Nic receiving letters of thanks from as far afield as Canada, New Zealand and Japan. If you'd like to find out more, contact us. 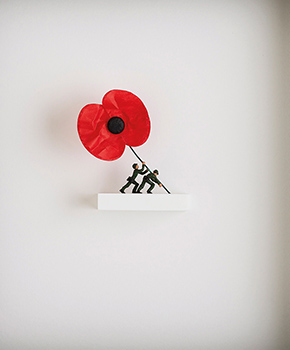 The miniature sculptor continued his fundraising for The Royal British Legion with an auction of his emotive 'Golden Lives Never Forgotten' poppy sculpture, raising £3,200 for charity.