Featured at Bob Dylan's groundbreaking Retrospectrum exhibition, 'Sunset, Monument Valley' captures the acoustic American landscape seen in The Beaten Path Series. Originally painted in acrylics on canvas, the fiery scene is influenced by the real-life highway and rock features of Utah, where Dylan has toured and taken inspiration for his lyrics. For this exclusive, hand-signed limited edition artwork, the original large-scale triptych has been recreated in a silkscreen format by a specialist atelier team, marking an exciting direction in Dylan's impressive repertoire. Contact us to find out more. 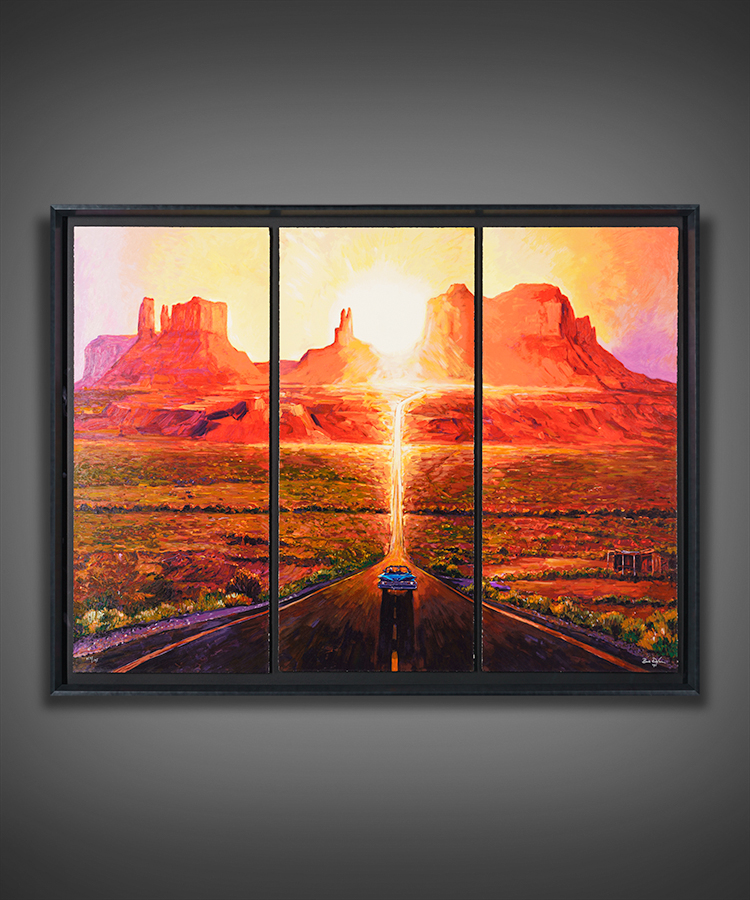 Located on the Utah-Arizona state line, Momument Valley has one of the most iconic backdrops in the world and is a quintessential image of the American West. A sacred area for Native Americans, its sandstone arches and vivid red tones – created by exposed iron oxide – have appeared in films and artworks throughout history, including the legendary Marlboro cigarette adverts.

The landscape is central to the Westerns of John Ford, such as Stagecoach (1939), My Darling Clementine (1946) and Fort Apache (1948). In a 2009 interview with Rolling Stone magazine, Dylan, a self-confessed fan of Ford, said: “I like that period of time in American films. If film is the ultimate art form, then you’ll need to look no further than those films. Art has the ability to transform people’s lives, and they did just that.”

Utah has appeared in several of Dylan’s song lyrics, including ‘Sign on the Window’, where he wrote ‘Build me a cabin in Utah’, and ‘Ballad for a Friend’, where he wrote ‘It left him on a Utah road.’ He has also performed in concert in Deer Valley and Salt Lake City. Dylan's new artwork depicts a view of Monument Valley that looks south on U.S. Route 163; a scene that will resonate with viewers who remember it from real life or films, and those who will be transported to the sand and heat only through the power of Dylan's brushstrokes.

Created in acrylics on canvas, the original 'Sunset, Monument Valley' painting measures an impressive 108in x 49in per canvas panel. As a triptych – a painting split into three sections – the artwork draws viewers' eyes to the central panel, where Dylan has created a fiery glow. For the limited edition print, these vibrant tones and light effects have been captured in full colour through the silkscreen process, which involves printing many layers of inks or paints through a fine mesh screen.

Each of the triptych panels was printed independently, with each incorporating 78 layers of pigmented and acrylic resin ink and a further three layers of brushstroke texture and UV varnish to create a glossy effect. A unique addition to any existing collection, the framed artwork is printed on hand-torn, acid-free paper made from 100% cotton. For further details, contact us.

Behind the scenes of Dylan's new 'Sunset, Monument Valley' artwork, including framing and fitting the museum grade glass.

Retrospectrum first opened to the public at Modern Art Museum (MAM), Shanghai in 2019. Spanning six decades of Dylan’s artistic career, the touring exhibition unites Dylan’s visual series, along with archival material and brand-new paintings. Following its opening in Shanghai, the exhibition then toured to the Today Art Museum in Beijing and the Jupiter Museum of Art in Shenzhen before launching at the Patricia & Phillip Frost Art Museum in Miami, where it stayed until April 2022.

"As with his words and his music, so with his painting; Dylan will keep us coming back, wanting to get up close."

Bob Dylan expert and Professor of the Classics at Harvard University

The prestigious Miami museum is exhibiting more than 180 of Dylan's paintings, drawings and sculptures, spanning 60 years of his art. Get in touch to find out more about this interactive and immersive display.
Essential cookies