Since his film debut in Steamboat Willie in 1928, Mickey Mouse has captivated audiences across the globe. In 2019, we experienced the magic of Walt Disney’s creations through blockbuster films like Dumbo, Aladdin and The Lion King, so we were thrilled to commemorate 90 years of Mickey with our exclusive Disney collaboration.

Created by the American artist Tim Rogerson – the official artist of Disney’s first-ever D23 Expo in 2009 and Disneyland’s 60th anniversary in 2016 – the two hand-finished canvases capture Mickey Mouse and Donald Duck. Painted in a Cubist style with a Basquiat colour scheme, the remarqued editions are accompanied by a certificate with the official Disney Fine Art logo. 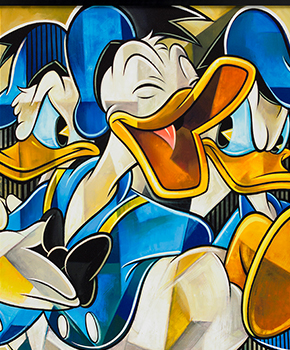 A Duck Full Of Joy 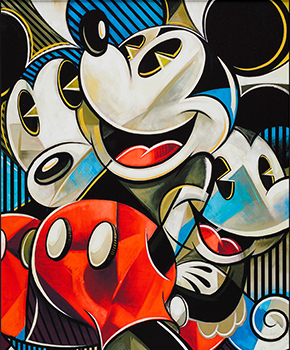 A Mouse Full Of Joy 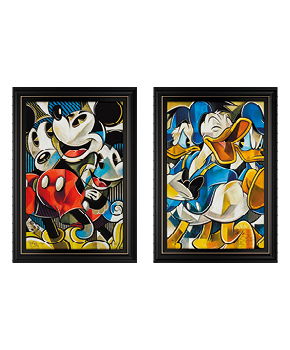 One of the world’s most famous cartoon characters, Mickey made his debut in 1928, when Steamboat Willie screened at New York’s Colony Theatre. The film was the first-ever animation to feature synchronised music and sound effects and marked the start of greater things for the mischievous mouse, whose ‘Oh Boy!’ catchphrase was originally voiced by Walt Disney himself. He has gone on to star in more than 30 films, and has been brought to life by over 50 illustrators and animators.

Introduced as a counterpart to lovable Mickey, Donald Duck is celebrated for his bad temper and incomprehensible ramblings. He starred in his first short, The Wise Little Hen, in 1934 and formed a trio with Mickey and Pluto before branching off into his own films in 1937. Boasting a total of 51 appearances, Donald is also a mascot for several army and air force squads – including the United States Coast Guard.  In June 2019, he celebrated his 85th anniversary. "My father taught me how to draw Mickey when I was five, and I’ve wanted to be a Disney artist ever since. I was hooked." We're working with Disney and Marvel artist Tim Rogerson for a limited number of commissioned original drawings, as decided by you. Now is your chance to own an incredibly unique artwork.